Learning about the Olympics is fun The preschoolers at Nederland Primary School enjoyed some of their own Olympics after hearing about them at school. They played football, made bubbles and passed an egg with a spoon (it was boiled).

Preschoolers in the Preschool Enrichment Class at Nederland Primary School with teacher Ms. Liz Cooley learned about the Olympic and Paralympic Games. They focused on how the world comes together and competes in sports.

Students were exposed to synchronized swimming, weightlifting, skateboarding, javelin, high jump, surfing and a variety of other sports and Paralympic sports.

Ms Liz said: “Particular emphasis was placed on athletic demeanor and the two high jumpers who shared a gold medal.” They talked about the five continents represented by the five Olympic rings. Also how the athletes all come to a city to compete together.

Preschoolers had their own preschool Olympics. They played soccer with a giant soccer ball. It was very fun ! They played balloon volleyball. Some preschoolers competed together by balancing an egg on a spoon. It was quite a challenge. Some have decided to participate in the tricycle competition. The bubble blowing competition was probably the most popular event.

Everything went well and the preschoolers learned how the world comes together peacefully to compete in the Olympics. 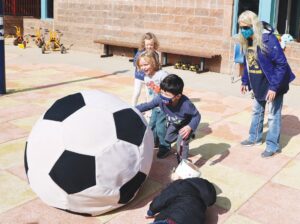 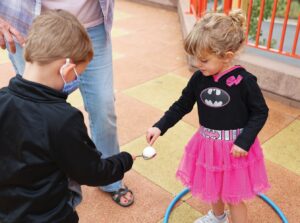 NES Preschoolers Discover the Olympic Games These preschoolers discovered the five Olympic rings. They then had their own preschool Olympics. Everything was done with pleasure and with good sportsmanship. PHOTO BY SARA SANDSTROM